thanks for visiting our blog. Here we will tell you a little about the wonderful surroundings in which we are privileged to work. York, set in the picturesque county of North Yorkshire is one of England’s most historic gems, featuring many ancient monuments charting a history of Britain.

But more than this, york is also a major shopping mecca and a world-class university town, boasting two universities, one of wich York University, is equal Oxford or Cambridge in many fields.

York also boasts hundreds of top class restaurants and as a number of fantastic bars and nightclubs, with a buzzing music scene, catering for all tasts.

One of the world’s most magnificent cathedrals, with foundations rooted in the nation’s earliest history. 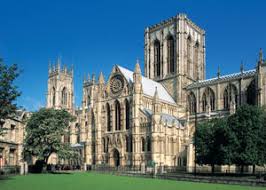 York’s cathedral church is one of the finest medieval buildings in Europe.  The Minster is also known as St Peter’s, its full name being the ‘Cathedral and Metropolitical Church of St Peter in York’.  In the past the church sat within its own walled precinct, known as the Liberty of St Peter.
The site of the magnificent medieval building has always been an important one for the city.  The remains of the Basilica, the ceremonial centre of the Roman fortress, have been found beneath the Minster building.
The first Christian church on the site has been dated to 627 and the first Archbishop of York was recognised by the Pope in 732.
A stone Saxon church survived Viking invasion in 866 but was ransacked by William the Conqueror’s forces in 1069.  William appointed his own Archbishop, Thomas, who by the end of the century had built a great Norman cathedral on the site.
The present Gothic-style church was designed to be the greatest cathedral in the kingdom.  It was built over 250 years, between 1220 and 1472.
As the natural centre of the Church in the North, the Minster has often played an important role in great national affairs – not least during the turbulent years of the Reformation and the Civil War.

There was an error retrieving images from Instagram. An attempt will be remade in a few minutes.